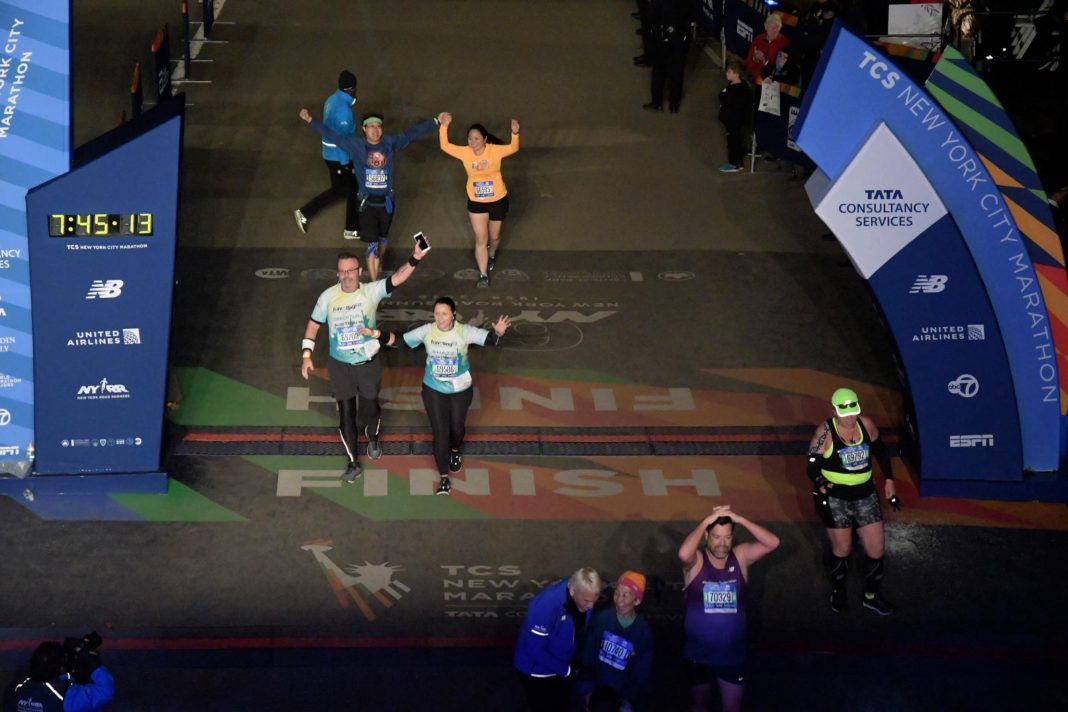 We looked at each other and smiled. After greeting the family at the 12 mile mark in Manhattan Avenue, it both hit us at the same time. We had run 12 miles. It hadn’t seemed like that. To put that in perspective, that’s just under 20km. We were almost halfway of the New York Marathon, and with the crowds and the support it had felt like we were just starting. That was soon to change.

Leaving Brooklyn we enter Queens via the Pulaski Bridge. The crowds had thinned out as we left Manhattan Avenue and as we wound our way around the final streets of Brooklyn, the streets were noticeably quieter.

The Pulaski Bridge is the 13 mile mark, and the 13.1 mile halfway mark. The views of the Manhattan Skyline are amazing and the people of Queens, while very much quieter were unique. That sign etched in my memory:

Those views were amazing going over the Pulaski Bridge. We knew half way was coming up and a small stint in Queens and then we hit Manhattan. But lets focus on getting to the half way mark first shall we, don’t get ahead of ourselves.

And there it is. The Half Way Mark. At this stage we were comfortable within ourselves, we had taken the recommendation of conservation in the first half of the marathon, and as this was our first marathon, the talk of hitting the wall kept us in check. Little did we know that we were approaching some pain for both of us.

Setting up camp at the 14 mile mark, were the wonderful people from Travelling Fit. Again, recognition of seeing someone on course is vital for your spirits and to see the team with a blow-up Kangaroo still cheering and encouraging the runners was uplifting.

Leaving Queens, you enter the Queensboro bridge and the trek into Manhattan. Queensboro is quiet. No spectators. The runners are alone with your thoughts, but you also sense the excitement of hitting First Avenue. First Avenue is described as the noisiest part of the course and that runners hear the crowd as you enter the final stages of the Queensboro bridge, and that is true. Remember please, we were towards the back third of the runners, so I can only imagine what it is like for the eilte runners. The crowds had thinned by the time we got there, but they were still noisy.

Coming down the Queensboro Bridge, hearing the crowd, feeling the excitement my knee decided that I shouldn’t be having as much fun as I was. My knee screamed out at me as we were coming down the downward slope of the bridge, causing an immediate stop to proceedings. Sitting on a concrete pillar, restrapping my knee, was not a moment for a pic, but it seemed to do the trick. No further problems.

Lets look at that for a moment. We had passed the 14 mile mark, meaning 12 miles to go and my knee had just given way. All I can say is thankfully we had been conservative as we were both going to “kneed” it.

Prior to my knee giving way, Sharon had had her own knee problems. The difference? She didn’t verbalise it. She figured, that if she didn’t say anything, it wouldn’t stop her. The first I knew of her knee pain, was after we returned to the hotel room. She was tough, she was focused and that’s what supported me in getting to the end.

Step by step. one foot in front of the other. Keep doing that, you’ll get to the end.

Coming down the Queensboro bridge, we enter Manhattan. We are more than half-way there. You can almost touch Central Park, but still so much to go.

The Dangers Of Binge Eating

Asking For Help (When You’ve Never Done Before)

Want to be smart? Go slow!

Susan Stein - August 1, 2018 0
In my previous blog, ‘How stress is wearing us down and what to do about it’  I briefly discussed the effects of stress on our body,...

#279 Monday Mentoring – When Your Team is a Top Priority

Tony Curl - February 22, 2021 0
One of the key priorities for any leader is the care of their team. The number one priority should be their team, the people they lead. And sometimes caring for your team often gets misinterpreted. Some will define that as being soft as a leader,...

The Mishap Becomes the Path

#212 Monday Mentoring – Is Your Dream in Focus?