How To Be More Organized In Life

3 Effective Tips For Staying Safe In The Sun

Why You Need an Eye Exam!

A Simple Test to Test Your Positive Thinking

Just Don’t Stop! Our running journey has continued in 2019 and our target was originally the Chicago Marathon but is now focused on the Melbourne Marathon on Sunday, October 13. The troubles and tribulations haven’t stopped this year and the move from Chicago to Melbourne was based on some of the injuries I have had. Namely my calves. Melbourne was simply less risk.

Some months back I tore my left calf, a tear confirmed by an MRI scan so I  embarked on a nine-week program to strengthen the calf while reducing running load. My physio and my remedial massage therapist were incredibly supportive. It was only then I was to start loading up with running. I followed the program pretty well and both of my calves were feeling much better and stronger.

Commencing running again was more difficult than I thought, with every twinge and tweak creating fear and doubt. It felt like Russian roulette. Over time, these fears and doubts started to reduce and the confidence returned. So I went into the Gold Coast Half Marathon with some confidence. I had successfully run up to 16 km in the leadup and had trained well.

During the race, I felt strong. One minor twinge on the calf when I had to suddenly shift direction, but mostly it was good and strong. I kept challenging myself from a time perspective and was looking to beat my previous time for the GC Half, by 5 minutes. Sharon had struggled at times with her breathing from her asthma but as we came down the finish line we were both doing ok. 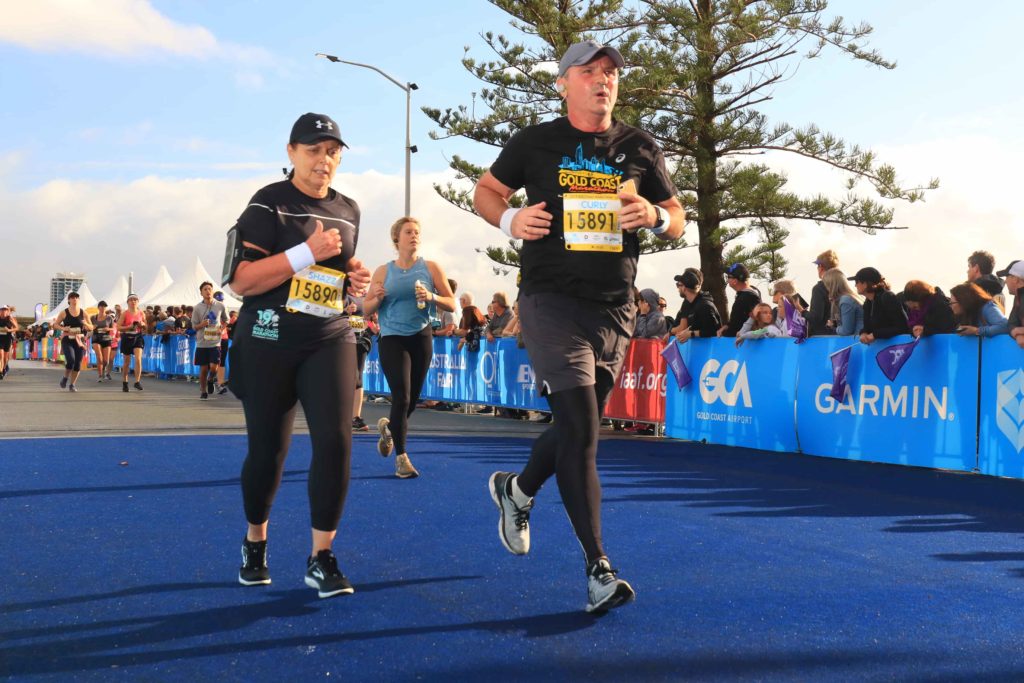 And then it happened. Just two strides after the above photo was taken my left calf tore again. It felt like a sniper had shot me, the pain was sharp and I could no longer put weight on my left leg. Lucky for me a course photographer was there to take the shot at that exact moment. On a positive note, we did beat the time from last year by four minutes and if you are going to injure yourself, doing it in sight of the finish line is probably the best place to do so. 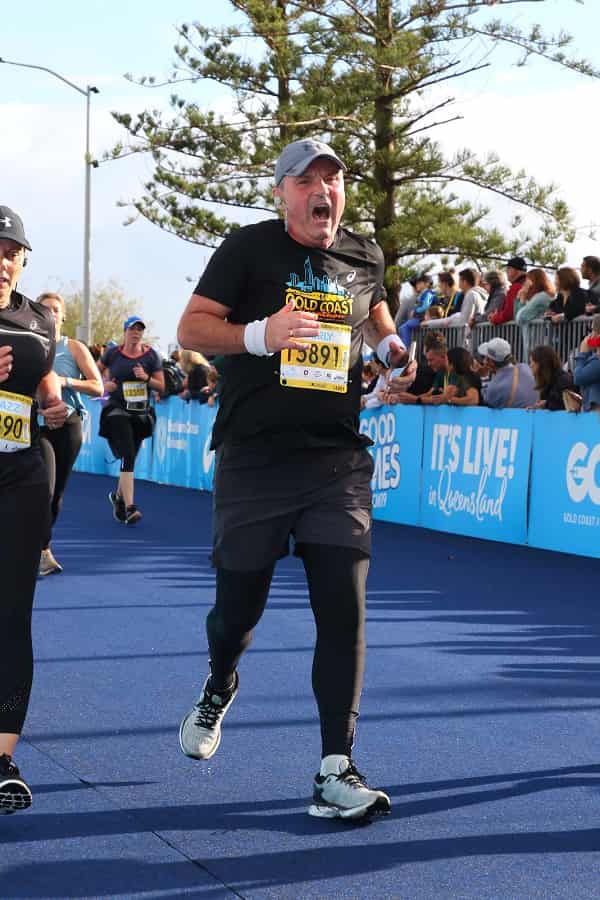 When you re-injure yourself, many thoughts go through your mind. As I hobbled over the finish line, with Sharon struggling to breathe, my thoughts raced to the Melbourne marathon and the challenges that lay ahead. I was thankful also that we hadn’t committed to Chicago as that would have been a long way to go for a risky run. And then I shifted my thoughts to the Sunshine Coast Marathon, just four weeks away. I slowly limped to where we were staying, cheering our fellow runners in the marathon along the way.

My thoughts were churning; a nine-week rehab in front of me; rest; recovery, ice, compression. All the drill. All condensed into a four-week program of detail and discipline.

Mainly rest. After two weeks I went for a slow jog and it felt ok. A plane trip on the third week seemed to unsettle the calf so my last week before the Sunshine Coast Half was one of total rest.

Which brought me to the day. Right up until the start of the race, I wasn’t sure if I would be running. The course itself starts heading to Mooloolaba and then loops back towards the start/finish line. Maybe, I thought, I could do that loop and make a call on how I was feeling. If I wasn’t good, I would stop after this section. That would be at the 7km mark. Sharon would then complete the race by herself. 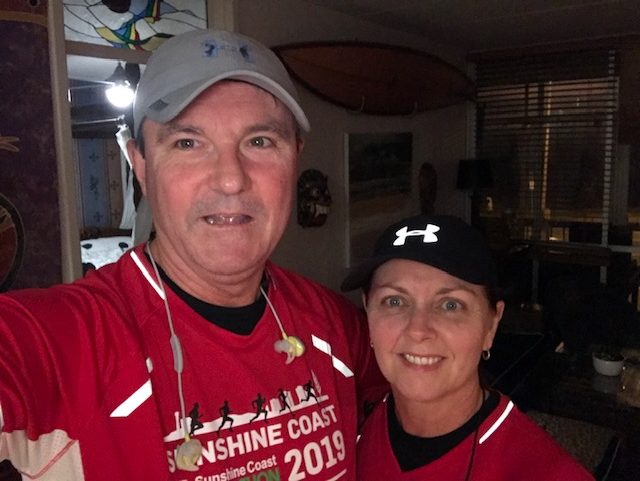 I had some slight twinges before then but chose to continue. Once started, I needed to complete. And our time wasn’t looking to bad either. I was using my modified running style and attempting to alleviate the shock and downward forces. When I say I was running, it was more like shuffling. But I was winning. Sharon started running away from me but I didn’t care. I was feeling strong enough, but I knew I was going to face some problems.

For the first time ever, I started getting a blister, so I had to stop and use one of the strips of strapping tape I had brought along as a just in case for my calf, I used for my heel. Worse things were to come. At the 14km mark, the calf went. The sharp pain returned. The risk I had undertaken had not worked and I now had the problem that I was at the furthest point in the course and I had to get back. So I continued, slowly gingerly, finding the best way to run forward (read shuffle) without aggravating the calf more.

One foot in front of the other, one step at a time. I wouldn’t stop. As I came to the 17km mark, I turned to see if there were any others behind me. I saw a long stretch of road with no other runners, but as I turned to face the front again, my weight shifted and the pain returned. I walked and stretched and reset. Note to self. Who cares if you are last, this is about finishing. Don’t turn around. One step at a time.

A short time later, I passed the turning spot for the runners in the marathon. I was thankful for having other runners around me again. There is always a sense of isolation running, but that feeling is exaggerated when running by yourself. So it was with relief that the sense of comradery returned. Surrounded by fellow runners on a quest of completion, while running in their own inner space. It was re-assuring.

And so it was, the final three kilometres were completed. And as I was running down the final kilometre, with the crowds urging me on, calling me by name a sense of overwhelming emotion struck me. I held back tears as I approached the line. Sharon was waiting for me, having completed 20 minutes prior. 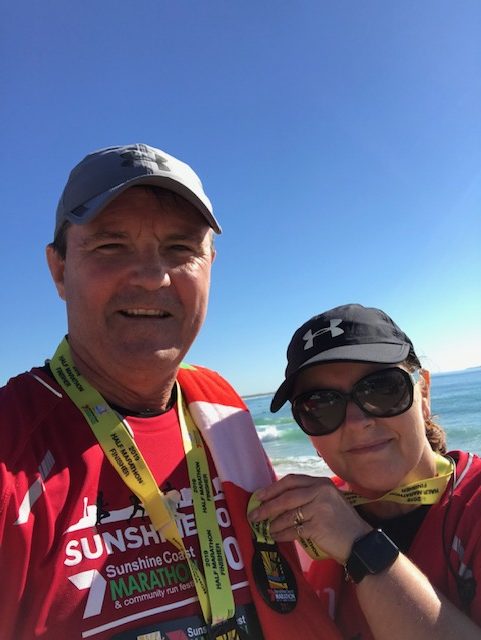 This was the hardest thing I have ever done, hobbling my way around a half marathon course, under-prepared, filled of fear and doubt.  Once I got running, however, my mental discipline decreed that I would finish. I never had a doubt of finishing once I was on the course. Once I got started, I was always going to finish. And now the rehab starts again. I have ten weeks to strengthen for the Melbourne Marathon.

The doubts and fears were always before I started, or early in the race. Much like everything we do. If we don’t start, we cannot finish. We just have to start, and then don’t stop. One step at a time, one foot in front of the other, keep moving forward.

For the record. I didn’t come last.  Out of 44 pages of 2200 entrants, I was listed on page 39 ahead of 13 other finishers spread out behind me and over 200 entrants who didn’t finish or didn’t start. When you finish a challenge, you are always ahead of those didn’t finish, those that never started and those that never entered the race. Coming last shouldn’t worry you, not finishing should.

Seriously Simple Stuff to Get You Unstuck.

Tony Curlhttp://www.coachcurl.com
Tony has been a successful corporate leader for 30 years. He now works alongside leaders around the world, and at home in Australia, to maintain clarity on their vision and purpose, and helps map their way around their roadblocks and obstacles. Tony helps people take the steps in their lives to become an influential leader. The leaders Tony helps aspire to greatness, so if you are aspiring to greatness take steps today. Unless you take action on your goals, they remain a dream. Tony is a published writer and his work is featured at his own Coach "Curl" blog as well as other sites around the globe. Tony is the owner and founder of Think and Grow Business and coaches and trains effective leadership skills and capabilities and develops better leaders, who then build better and stronger business. His passion lies in helping people discover their greatness by raising their leadership ability. Yes, everyone can be a leader and everyone should see themselves as a leader. Be the inspiration for someone today and let your journey inspire you. He has a growing following on his Social Media channels and has been published on a variety of sites around the globe. His words get quoted and shared daily by that growing tribe. He shares under the hashtags #dailyfuel #breaktheshackles. He recently released his first book "Seriously Simple Stuff to Get You Unstuck". Available at strongerbraverwiser.com

Stop taking motivation for granted. Whether you don't believe you have it, or that it will mysteriously appear tomorrow. Follow some simple steps in your life that helps you focus. Join our free Academy group on Facebook....

Cover Image Credit People have varied reasons for avoiding the dentist all their lives. While some associate it with anxiety issues, others believe the sheer...

Reflecting Often when we reflect we have rose coloured or dark coloured glasses. Today was a bit of a reflection for me as it was...

Energy and enthusiasm we either have too much or too little. And often we seem never to find the perfect balance And then we see the world of social media, where we often share posts of how pumped, excited, awesome it was to do, see or feel whatever...

My Home Town It saddens me when I go into town, The shops boarded up, and the people are down On their luck as the world changes...

3 Tips For Staying Motivated At Work

#78 The Coach Curl Podcast – Your Strategy for the Four Key Drivers.

Keeping Bold Long After Getting Old

#178 Practical Tips to Control Your Anxiety

#183 The Problem with Australian Made – We Have Created the Problem

Ways You Can Contribute to a More Sustainable Future

A Guide To Healthy Grieving

306 Claus Raasted – The Innovation Cycle and the Tattoo KPI

A Non-Runners Guide to Running The New York Marathon. 30 Days